Support Us
CCAS was founded in 2015 and established in Bailey, CO in October of that year. The first year was a huge learning curve as we figured out who we wanted to be.

We began rescuing dogs and cats initially, and learned pretty quickly that we had to choose. As word got out that we work with cats that have Manx Syndrome, the flood gates opened with calls from across the country looking for homes for Manx and other cats with incontinence.

CCAS inadvertently became a niche program for cats with special needs - particularly those with bowel and bladder problems. By fall of 2016, the small in-home sanctuary was at capacity, which is 15 animals (including personal pets) without being licensed.

Becoming licensed in a home with carpet and other issues for a residence was a problem we were attempting to remedy when we lost our home to a fire December 6, 2016.

That was a major setback that required creative thinking for temporary housing of 12 cats and 3 dogs. One of the very generous vets in Conifer offered to board the cats for two weeks until we could figure out what to do - Dr. Palmini is such a gift.

By Christmas a very hard to place dog we had rescued was adopted while being boarded, thanks to local news coverage. We had some very difficult months ahead with the cats living in one side of a duplex three miles from the cabin we stayed in. It was the best we could come up with at the time. The woman who offered it was a saint.

The first three quarters of 2017 were consumed with temporary housing and insurance issues. We learned to live with and manage 10 cats, 2 dogs (one a Great Dane) and 2 humans in a 350 sq foot RV purchased with donations during the coldest months of the year. It was beyond challenging - LuAnn took showers at a friend’s house for six months.

We survived long enough to find a rental cabin two houses down so we could split up and calm down.  Almost two years after the fire, we are still in temporary housing and dealing with zoning issues, but there is some measurable progress on the rebuild.

Two cats were never recovered after the fire. We had no intention of taking more until the rebuild is complete. However, when Hurricane Harvey created such a crisis in Texas, we felt we could help at least a bit by taking one cat with Manx Syndrome that had been on the waiting list for a year. Zeus entered the sanctuary in September 2017.

Two months later a cat in NY with no back feet, the inability to use a litterbox and plenty of emotional problems from living in a hoarding situation was in desperate need with no other options. Cyndi Lauper entered the sanctuary in November 2017.

Because we got so many calls for help, we started doing some very limited local outreach to help people spay and neuter and/or rehome pets locally. It was all we could do at the time.

We decided to offer help locating homes for some of the cats we could not accept.

After working with a rescue for three months to locate a home for a cat with Manx Syndrome in CA, we finally agreed to accept him with a donation to cover expenses for one year of care and establish a medical savings plan. Napoleon entered the sanctuary in October 2018.

Operating a sanctuary to provide lifetime care for animals is very different from most animal caring organizations. The 'beds' rarely turnover as they would if the cats were leaving for an adoptive home.
​
This means that our capacity is very low - especially considering the cost of caring for special needs cats in group living arrangements. Unfortunately, expenses are very high. We have been fortunate to have a vet on our board who offers CCAS cats pro bono services until we can secure the funding to put her on a retainer.

Our capacity will not change until the rebuild is complete. However, we are assisting individuals and rescues in securing homes for cats that we are unable to accept - which means they don't really need lifetime care.

We are learning more every day about the problems associated with sanctuary care, and exploring other ways of caring for our special cats, Meanwhile, the number will remain low, though we are now including statistics about other services we provide, including alternatives to intake and mentoring.

​If you have questions, feel free to email ccas.denver@gmail.com. 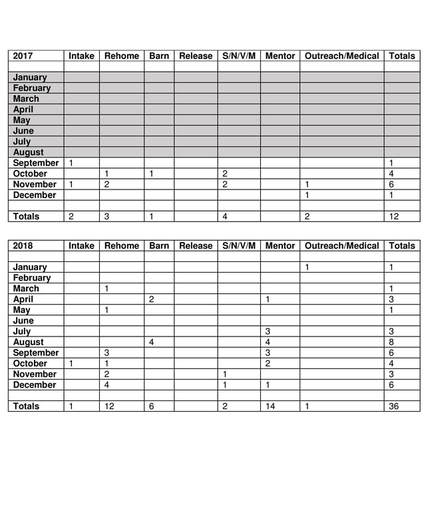 What the Numbers Don't Say
The goal of most animal caregiving organizations is to move animals in and out of their facility as quickly as possible via adoption, return to owner, etc.  CCAS is a place where animals are transferred as a successful outcome. For those with no other options for forever families - our sanctuary becomes their forever home aka lifetime care.

As an organization that cares for animals for the duration of their lives, we are unable to offer some of the statistics that most animal caring organizations provide, such as live release rate. We have no releases and the goal is usually 90-100%. In that case, our agency would be considered an abject failure - and we are not.

Success for CCAS is about providing the best care available for the cats we are charged with. It is measured by their quality of life, which is hard to quantify.

Alternatives to Admission
We inadvertently began practicing one of the key initiatives of the no-kill movement, alternatives to admission, since the fire while intake has been closed.

In the fourth quarter of 2017, we began to offer (very) limited outreach services to help local cats avoid admission to shelters. This was accomplished in most cases by providing funds for spay/neuter and vaccines for strays to enable them to remain at home, or facilitating rehoming as needed. Food and litter were provided for local stray and feral cats on several occasions, also.

One case required food and litter assistance for a few months, air transport for a homeless man and his special needs cat to relocate, paying for a health certificate and purchase of an airline-approved carrier.

In the second quarter of 2018, we began to actively assist in finding homes for cats that were referred to CCAS since we unable to admit them. This involved paying for ground transportation for four cats to relocate and air transport for one cat. Securing health certificates, vetting and related travel expenses.

We also began to informally mentor people with special needs cats who needed support, resources and guidance to help owners or rescuers keep them or sustain them until they could be rehomed.

The table above indicates the number of cats that we helped find homes for (including some barn homes) and others that we helped avoid shelter admission by mentoring their owners or newly rehomed families. This was accomplished without any formal planning or programming.

In 2018, those numbers have tripled - again unintentionally. Because of this success, we are launching a pilot program to formally develop an outreach program that offers wraparound services to families.

2019 Pilot Program - Outreach Services as an Alternative to Admission
In 2019 CCAS will develop a formal outreach program offering wraparound services to families and rescuers to avoid admission. It will entail several components, including training, respite care, transportation assistance for rehoming and adoption, emergency supplies (food, litter, etc.) and vetting.

The goal for 2019 is to prevent 50 cats from entering animal services.

Lessons Learned:
It has become obvious that lifetime (and usually shelter) care can usually be avoided if people receive wraparound services. This awareness is changing the way we envision lifetime care. As we stretch into some new ways of helping special needs cats, we will examine ways to improve our continuum of care. We look forward to getting involved in larger efforts on behalf of special needs pets to #savethemall and #saveustoo.